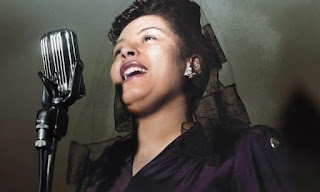 After a troubled life, Holiday died handcuffed to a hospital bed. Posthumously,  she won four Grammy Awards and was inducted into the Grammy Hall of Fame and the National Rhythm & Blues Hall of Fame.

At the end of her show each night, the lights would go down, all movement and chatter stopped, and Holiday would sing the piece called "Strange Fruit." In 1999, Time magazine declared that song “song of the century.” The song was originally written by Abel Meeropol, a Jewish school teacher, poet, and activist from New York City. A photograph of a lynching in Indiana some years earlier had deeply disturbed Meeropol, inspiring him to write “Strange Fruit,” and the song eventually made its way to the Greenwich Village nightclub where Holiday sang.

The lyrics of "Strange Fruit." Not a pleasant story but one that must not be forgotten! 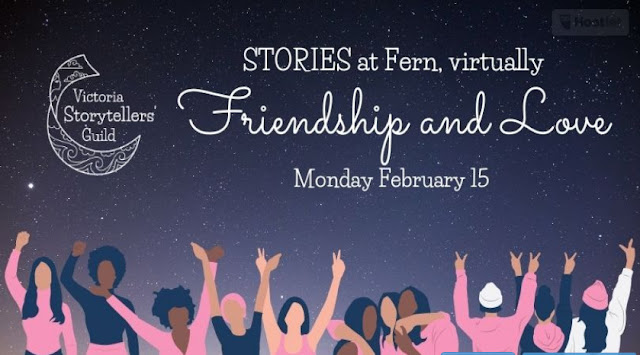 Please join us for Stories at Fern, as we explore heartwarming stories of friendship and love. The show starts at 7:30: storytellers and story listeners are welcome!

Admission is free for members who have paid their dues – thank you for your support! If you would like to become a member or pay your $25 annual dues, you are always welcome. If you are just dropping in to a virtual event, the suggested donation is $5, which can be made in three ways: via Paypal (paypal.me/storytellersvictoria), an e-transfer to treasurer@victoriastorytellers.org, or you can contact us to obtain a mailing address for a cheque.

Connections accepted from 7:00 pm onward. Please come early and address any technical concerns before the stories begin at 7:30 pm

We are using Zoom, an online conferencing system. There is no need to create a Zoom account, however we are asking our friends to register in advance for a secure, enjoyable experience.

To register now click here
or copy and paste this link into your browser: https://us02web.zoom.us/meeting/register/tZUvf-qsrTsqHdNAfYtkrjvef192T4JmBnnn

When you have registered, you will receive a confirmation email with the specific instructions for joining us by computer, tablet, smartphone, or regular phone.

What would you do if a black cat walked across your path? Would that be good... or bad? 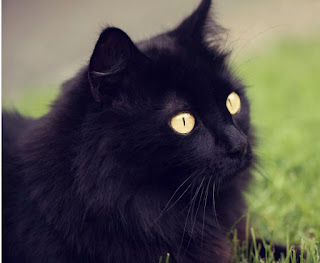 With hallowe'en soon upon us, perhaps, for the safety of all, we should concern ourselves with such topics. Black cats have featured in stories for over 2,000 years! In Celtic folklore, it was believed that black cats turned into fairies and back. In Great Britain, as in Egypt and Japan, having a black cat would bring you luck and good fortune. In the English midlands they make the ideal wedding gift that will bring luck and happiness to the bride. In Japan, it is believed that a single woman who owns a black cat will attract more suitors. On the other hand, in Europe, in the Middle Ages, they decided that black cats were evil and foreboding; that they were really witches or demons. Many black cats were destroyed. People caught with a black cat were severely punished. When European settlers took over North America they declared that if a black cat crossed your path it would bring bad luck.
Posted by Al Fowler at 5:47 PM No comments:

Come out of the weather … and share the warmth by the fire. Stories at Fern starts at 7:30, virtually! 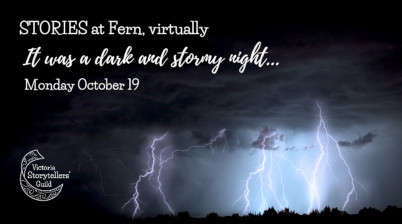 You can sign in from 7:00 pm onward – Please come early to sort out any technical glitches before Al, our host, starts the storytelling at 7:30 pm

We are using Zoom, an online conferencing system. Admission is free, and there is no need to create a Zoom account, however we are asking our friends to register in advance for a secure, enjoyable experience.

To register now click here
or copy and paste this link into your browser:

When you have registered, you will receive a confirmation email with the specific instructions for joining us by computer, tablet, smartphone, or regular phone.

We are looking forward to seeing you again and having you join us for our second Fern St. of the season!
Posted by Al Fowler at 7:20 PM No comments:

Coping with the crisis, the Victoria Storytellers Guild have started a new service: Dial a Story!

Contact info@victoriastorytellers.org and someone will arrange a suitable time and story for you to receive by telephone.
Posted by Al Fowler at 12:23 PM No comments: 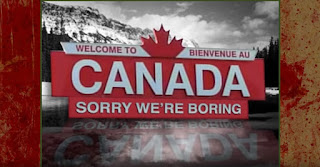 Stories are important. We are the stories we tell.

There are so many great stories from Canada's past, but we have forgotten them. We have become overwhelmed by that great myth making machine that lives to the south of us. To them we are no more than the boring inhabitants of the frozen north. There is the image of the Stalwart Mounted Policeman and his mandatory dog, who proudly gets into the way of anyone wanting to have a good time... but that's it.... and they don't even get that one right!

So many Canadians have done so many fantastic things, sometimes against incredible odds. They have been examples of strength, intelligence and endurance that we all could emulate.Guided by stories from the past, you could be the next great person in Canadian history! 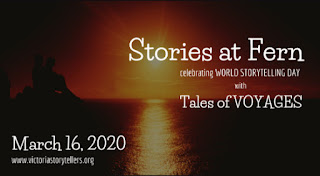 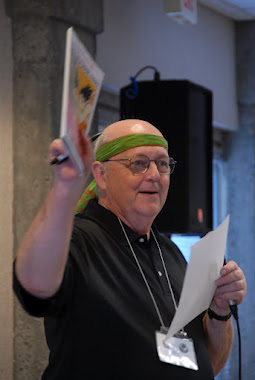 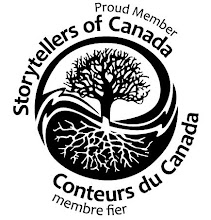 Blogs By and For Storytellers

This work is licensed under a Creative Commons Attribution-Noncommercial-No Derivative Works 3.0 Unported License.